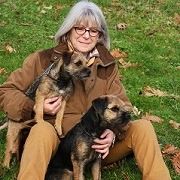 I was born in a terrier breeder family. My grandparents always had what was called at that time in France“ratiers” and would be called nowadays “smooth jack russel” and my parents started breeding Welsh terriers before I was born, so have always been surrounded by terriers since my youngest childhood.

I got my first Border terrier in the very early 80’s, and quickly realized that Border were “My breed” ,

And I started to breed border terrier on a regular basis since middle of the 80’s.

Up to know I made up about 35 French champions most of them becoming also International champions, some we produced ourselves and some we imported. Amongst our imports were dogs from England, Denmark and Sweden.

In the early 90’s we made up the first Border Terrier in the French history to become working champion on Fox underground.

I started judging the breed 22 years ago and was delighted over the years to judge it in France, England, Switzerland, Germany, Belgium, Denmark ,Sweden, Finland, Czech republic, Canada and Australia.

I would like to thank you very much to give me the opportunity to judge this so prestigious event.