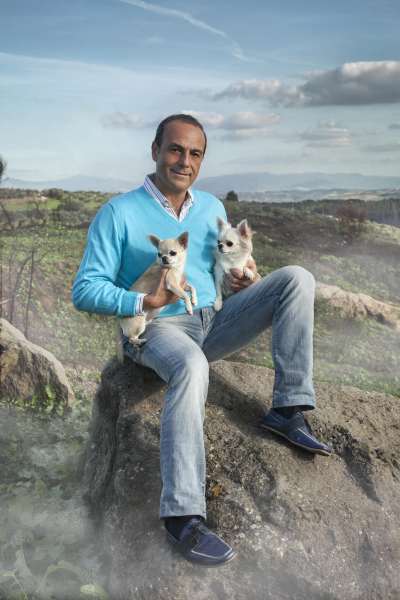 Born in year 1963 in Rome, Italy, in a “dog family”. His father was a judge and bred together with his mother Poodles with the prefix “Della Perla Grigia”.

His affix "Di San Gimignano" was recognized by the Italian Kennel Club (E.N.C.I.) in the year 1984. San Gimignano is a beautiful medieval town in Toscany. At that time he bred Poodles, the lines came from England, from famous Tiopepi Kennel.

He began to breed and show Chihuahuas year 1996 after marrying a Chihuahua breeder Tuula Lehtinen-Cochetti (Misty Meadow’s Chihuahuas). He breeds in small scale also Jack Russell Terrier and Toy Poodles. Together with his wife he bred more than 600 Champions, exported worldwide.

They have won many Championship titles with their Chihuahuas and Poodles, including World and European Winners, English Champion and many BIS around the world. He has also bred in the past Dobermann and Boston Terrier.

He is listed in Italian Kennel Club (ENCI) as a specialist in the all toy breeds and most of the terriers. He is also a teacher of these breeds to new judges.

He is the writer of a Chihuahua’s book, which has been translated in different languages.

He has been often the lecturer for seminars organized also abroad, for Bolognese, Maltese, Chihuahua, Poodle and Jack Russell Terrier.