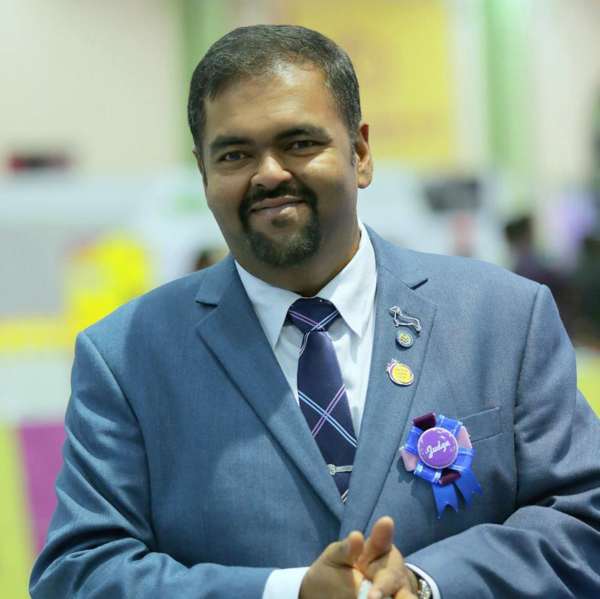 Studying in the UK for nine years afforded Gopi the opportunity to attend dog shows every weekend and the many hours spent ringside, showing, visiting top kennels and breeders helped foster Gopi’s love and interest in the Dachshund. Together with his brother Robbie, the HACIENDA prefix was registered in 1994 and their first litter registered in 1999.

In 2008, Gopi married Christine and since then she has also been part of the Hacienda prefix. Focused on getting the best lines, they have imported dogs from the UK, Australia, New Zealand, Canada, USA, Finland & South Africa. Hacienda have successfully owned, co-owned, campaigned (owner exhibited) and titled 150 Champions in Std. Smooth, Std. Longhaired & Min. Longhaired Dachshunds, English Setter and English Cocker Spaniels. Of the 145 Champions, 106 are proudly homebred HACIENDA Champions, both locally and overseas, in Australia, England, Ireland, USA, Canada, Brazil, Luxembourg, Italy, Switzerland, Poland, Slovenia, Estonia, Russia, New Zealand, South Africa, Japan, Pakistan, India, Sri Lanka, the Philippines, Indonesia, Singapore and Thailand, with others on track to their titles in various other countries around the globe. Several of these homebred Champions are proudly Multiple All Breeds Best in Show Winners overseas and Grand champions.

Professionally, Gopi is involved in the IT line and is the CEO of a global IT Services company headquartered in Malaysia. Gopi’s love of animals and his interest in the promotion of responsible pet ownership has led to his involvement with PAWS Animal Welfare Society, which he served as in the capacity of President for 6 years and which he currently serves as Secretary.

Gopi has also served on the Malaysian Kennel Association’s (MKA) Board for several terms and is currently the President. Gopi also serves on the FCI Asia & Pacific Section Board and currently holds the Treasurer’s position.

Gopi joined the MKA judges training scheme in the 1990’s and since then he has had the privilege to judge in Malaysia, the Philippines, UK, India, China, Thailand, Taiwan, Japan, Indonesia, Ireland, Romania, Russia, Estonia, Norway, South Africa, Mexico, Australia and New Zealand. Gopi is an MKA licensed International All Breeds judge.