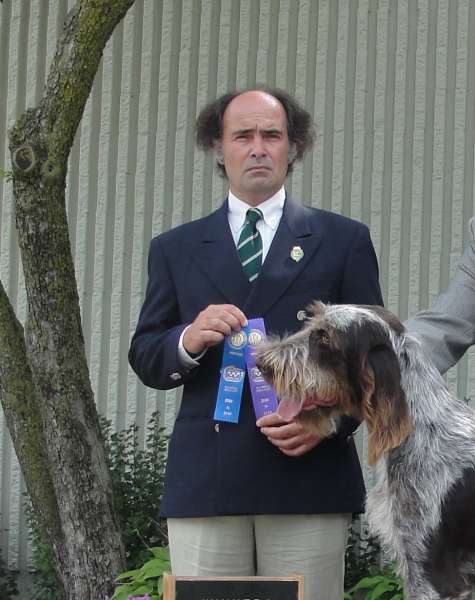 Dr. Ivaldi was born into a family where gundogs and horses were very much part of everyday life. His father was from Piemonte and he had Italian Spinoni for hunting and his mother was related to the Ceresolis, authors of the famous book on Spinoni and breeders with Della Cà de' Paoli kennel name. In 1989 he purchased his first own dog, a Gordon Setter from a field trial blood line, which was followed in 1993 by his first show bred Gordons from the UK. The first “personal” Spinone arrived in 2000, a white and orange bitch. To date Dr. Ivaldi together with his wife Ludovica has bred and campaigned more than 50 Champions in both breeds, but mainly bred with much success for others in all the European Countries and most recently in the USA and Australia. In Spinoni his most successful dogs hold the Italian, International, European and World Champion titles.

In 2003 he was passed to judge Setters and Pointers. In 2005 he was passed to judge Italian Bracchi and Italian Spinoni. He judged these two italian breeds in Italy, Ireland, Finland, Sweden, Switzerland, UK and USA (National Specialties in 2014); the other breeds also in Australia, Austria, Czech Republic, Estonia, Germany and Slovenija.

Out of the dog world he is an editor and his interests are in sailing and in vintage cars.