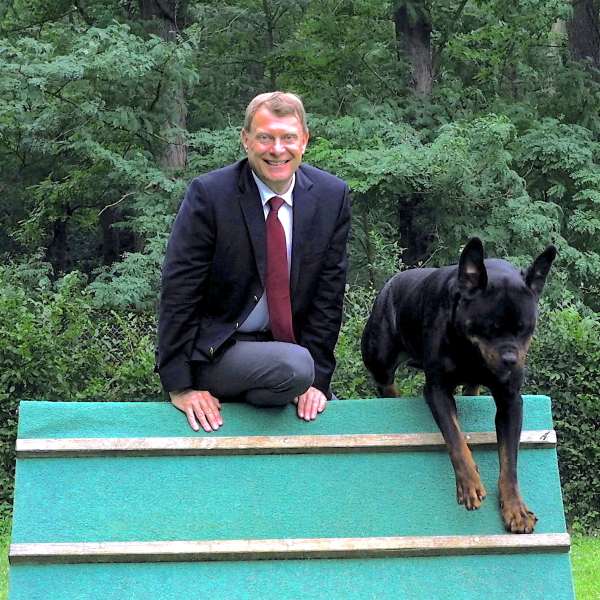 Peter Friedrich, born in 1958 in Mainz/Germany, startet training dogs in the field of Schutzhund/IPO/IGP-Trials and Tracking Trials in the year 1970. He joined the Allgemeiner Deutscher Rottweiler Klub (ADRK) in the year 1980, worked almost daily for more than 25 years as a helper in protection work and is a member of the Rottweiler kennel „vom Sternbogen“. His best results with self-trained Rottweilers have been 297 points in SchH/IPO/IGP3 and 100 points in FH2. He got a working judge in the year 1990 and is Körmeister in the ADRK. He owned and presented Staffordshire Bullterriers. In teamwork with his wife Heide, who is the owner of the kennel Tahuara’s, he breeds Greyhounds and Sloughis today. In 2008 he became a breed judge and is licensed to judge all breeds of Group 1 and several breeds of the groups 2, 3, 5 and 10 at the moment (please take a look at the FCI Show Judges Directory). He has been the chairman of the breeding committee in the Deutscher Windhundzucht- und Rennverband (Sighthound Club) from 2008 until 2011. Since 2009 he is the president of the Verband für das Deutsche Hundewesen (German Kennel Club). Since 2017 he is a member of the Standards Commission of the FCI. Peter Friedrich has been judging in more than forty countries distributed over all five continents.