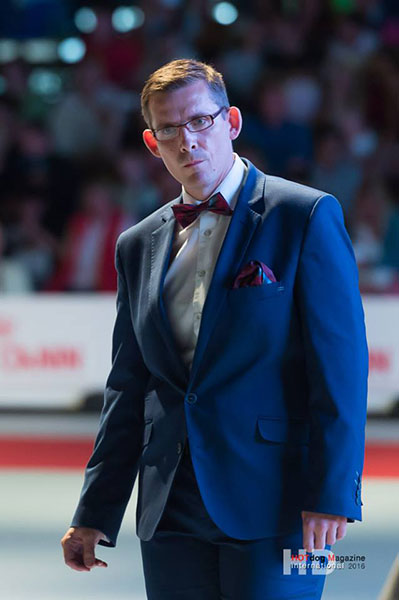 I was born in 1977. All my life has been connected with the love of animals, especially dogs. The first one was a Wirehaired Dachshund, later on came a Cesky Terrier, Skye Terrier, a West Highland White Terrier, also in co-ownership an American Cocker Spaniel, a Bobtail, an Irish Terrier and a Newfoundland. The FLANAGAN prefix was officially registered by the FCI in 1994 and we have bred several litters and very successful dogs under it. I still breed the Skye Terriers nowadays, but also the West Highland White Terriers with my wife Martina under her prefix SUNSHINE CELEBRATION. Our most important success includes many championships from not only European countries, international championships, several European and World Winner titles, including our bred dogs and Crufts, Westminster and Montgomery Best of Breed Winners. You can meet dogs from both of our kennels around the whole Europe, but also in Asia, Australia and on the American continent.

I have entered the world of dog shows twenty eight years ago, first as an exhibitor of my own dogs, later on as a handler or groomer of other breeds.

I started judging in 2001. Today I am an international judge for all breeds of the FCI group 3, 4, 8 and some breeds from groups 1, 5, 6, 9, 10 and Best in Show judge. I have judged many international, national and specialty shows in Slovakia, Austria, Belgium, Croatia, Czech, Denmark, Estonia, Finland, France, Germany, Holland, Hungary, Italy, Ireland, Latvia, Lithuania, Luxembourg, Norway, Poland, Portugal, Romania, Russia, Serbia, Slovenia, Spain, Sweden, Switzerland and USA, from the most important shows I should mention the FCI World Dog Show 2009, FCI European Show 2011, 2014, 2016, 2018 World Special Terrier Show INTERRA 2013, the BIS at World Terrier Show Helsinky 2014 and the Montgomery National Specialty 2017 in US. Very often I judge Junior Handling. Out of all the show invitations I mostly appreciate to get the honor of judging club or specialty shows of different breeds.

Through the years I have been a member of the board of the Slovak Terrier and Fox Terrier club, and nowadays I´m chairman of the show committee of prestigious international dog shows Dog Expo Nitra – one of the biggest event in Slovakia. I´m member of FCI Show Commission.