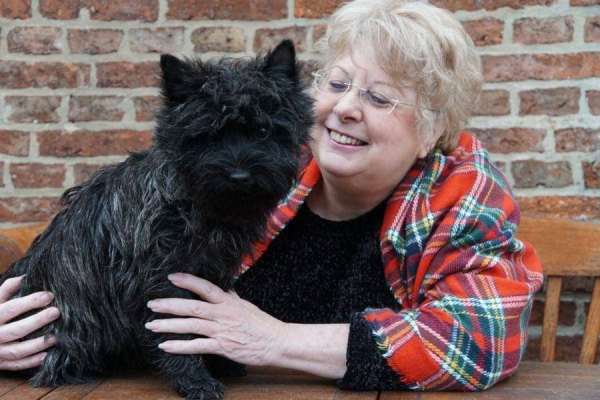 In 1972 I had my first Cairn Terrier for only 8 years and after him a new boy and later a girl joined and that was the start of it all. Rather soon I also started my judges education because I wanted to learn and it was the only education in dogs at that time. Became a judge in 1989 and for every terrier breed I had a full exam, not the easy way back then. It helped me also a lot in breeding and construction and movement and recognise breed typical movement became “my thing”. Lost my heart to Terriers but had the joy of having some breeds in my life, like Saarloos Wolfhound, Bearded Collie, Shih Tzu’s, Airedale, Softcoated , Yorkshire and ofcourse wire Fox Terriers. Terrier temperament is very special and I feel blessed to have met so many breeds who learned me so much.

Had the honour to met some well known breeders in my life mr. Walter Bradshaw of the Redlettter Cairns and my dear friend Mrs Maud Montgomery-Bjulhult of the Sarimont Cairns.

Loved to show my dogs but health and temperament are the most important to me. Have many Champions, imported as pups and home bred.

Love to educate new judges in type and special construction and movement and all they need to know about the Terriers.

Judged in many countries as a Terrier Specialist but never became an all rounder.

Very honoured to be invited for the Wold Show to judge my breed. And happy to visit the beautiful country of Czech Republic again.